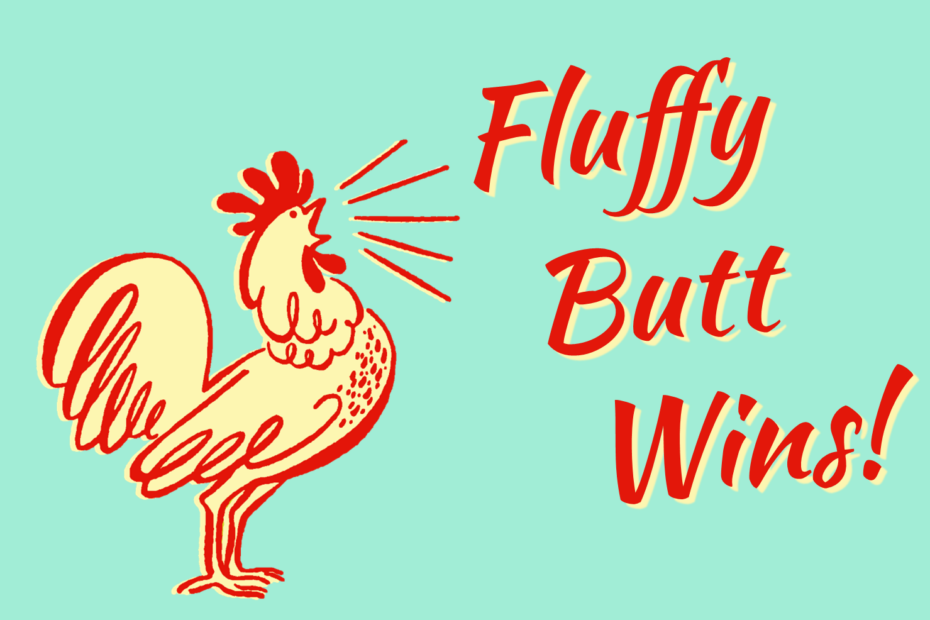 Eastern Shore Market is proud to announce that Fluffy Butt the rooster recently won our mascot competition in what proved to be a heated race. Preening and reveling in a celebratory strut, Fluffy Butt commented, “Bout time a rooster got some respect.” The hen’s guild, in an uncharacteristic show of quiet, refused comment on the win. However, sources close to the matter indicate several parties believe the contest was rigged and will call for a recount.

The competition was announced last fall when planning for Eastern Shore Market began. Our marketing team soon realized that, as great as our logo may be, it doesn’t portray the full breadth of ESVA personality required. Entrants from the local area included pigs, sheep, ponies, mosquitos, geese, and of course seagulls and blue crabs. Contestants competed in several categories, had to pass a rigorous background screening, and were required to prove ESVA citizenship by accurately pronouncing the town names of Chincoteague and Machipongo, plus say “Assawoman” without laughing.

All Canada geese failed the ESVA citizenship test, being relegated as northern come-here’s, despite claiming to now being permanent residents. They insisted they couldn’t pronounce Machipongo due to the shape of their beak, and discrimination lawsuits have already been filed in both counties. The farm animals’ guild called a strike in the middle of the competition, demanding an increase in pay, causing all pigs and sheep to walk out. One pony competed quite well, showing promise for the positive vibe and calm energy it represented, but had to pull out at the last minute due to a pre-existing contractual conflict with just about every business on Chincoteague. Both seagulls and blue crabs fell victim to a vicious mudslinging campaign purported to be orchestrated by the Russians, despite the fact they enjoy a positive public image by being included in more local logos than any other animal on the Eastern Shore. In their exit interview they remarked, “Quite honestly, we’re relieved. I mean, how many times does someone need to see a seagull or crab in a logo?” Mosquitos, despite being the official bird of the seaside, didn’t make it beyond the first round for obvious reasons.

When asked why he didn’t honor the strike called by the farm animals’ guild, Fluffy Butt replied, “I’m not a union member. I try to join every year, but come to find out not everyone enjoys being woken up just because the sun rises.” Fluffy Butt celebrated his win with a triumphant crow, but remaining barnyard animals appeared uninterested. “I have no idea what you see in Fluffy Butt,” one cow commented. “He just makes noise.”

Either way, our marketing team is looking forward to all Fluffy Butt has to offer and feels a rooster conveys a positive image of the rural lifestyle so many of us enjoy on the ESVA. And have you seen how beautiful roosters can be? Take a look at a few shots below and share photos of your own favorite rooster with us on Facebook or Instagram. We’d love to see them!

Many thanks for your interest, and don’t forget to Love Local!